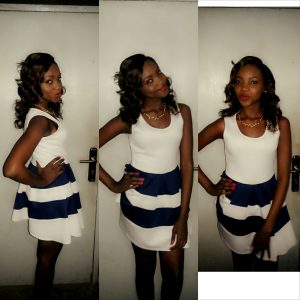 This picture was taken almost 6 years ago while I was in the University. I had told my roomies (roommates) that I had a date with a guy (who wasn’t my boyfriend) and boy, were they excited! Get this, they weren’t excited because I was going out on a date, they were excited because the guy I was going on the date with wasn’t my boyfriend. Although I had a boyfriend at that time, my friends never really liked him (Actually, they hated him) because he treated me badly, yet I stayed (which is crazy anyway). Even though he cheated me on me incessantly, I never retaliated. I wouldn’t even go on a date with anyone. So you can I imagine their joy when they found out that I had decided to go on a date with another guy. They took it personal. They dressed me up and made me up. So off I went with a random guy!

Initially, I was glad that I had finally got the ‘nerve’ to pay my boyfriend(now ex) back for his many cheating. I had planned to go on the date with the guy, take pictures and then post them on my BBM status to spite my boyfriend. But Mr Random had other plans…

After picking me up, Mr Random tried to hug me. No problem. But then his hands began to extend to under my dress – my short dress. I shoved his hands aside, he smiled, apologised and in my naiveté, I told him it was fine.

While on our way, he began to touch my legs. It was at that point I knew that I was in trouble. I didn’t even carry vex money! I told myself that I would have to endure and probably spend few minutes with him after which I would tell him to take me back to the hostel. Problem solved. “Please don’t touch me like that. I don’t like it”, I told him in the nicest way possible. The last thing I wanted was to be dumped on the side of the road at night with no transport fare. “Just endure, and don’t try this nonsense again”, I told myself.

We arrived at the venue for the date. We ate. He talked. I pretended to be paying attention, while I strategized on how to head back to the hostel. “It’s getting late. They will lock the hostel gate soon. Please take me back”, I said to him. He agreed to take me as soon as he finished his drink -the 3rd bottle he was having that night. Not long after, he ordered for a pot of shisha. The clock struck 12 and I knew I had gotten myself into a big mess!

“God, please don’t let this guy rape me. Please, God. Let him not use me for ritual. God, I will never do this again. Please, help me”, I prayed silently. I looked at drunk Mr Random, and looked back at my watch. 1am. “Let’s go”, he said, staggering as he got off the chair.

We arrived at Mr Random’s house. Shivering, I took off my shoes as I stepped into the living room. Without wasting time, he pulled me to himself and tried to pull off my clothes. The stench of alcohol in his breath almost made me puke. Somehow, I managed to escape from his grip and I ran as fast I could to the kitchen which was directly opposite the living room. Luckily, it had a key so I locked the door immediately. He kicked and cursed and kicked some more. I could hear him flounder as he made his way  to another part of the house. Then he began to scream and  vomit.

I couldn’t understand why he would get so drunk and so high at the same time. His vomiting lasted for almost 10 minutes. I was disgusted and disappointed. I began to cry. How could I have gotten myself into such a mess. Is this the way dates are? My boyfriend was probably somewhere with another girl, and here I was in hell all in a bid to spite him?  Why didn’t my roommates warn me about these hazards? None of them even called! The mosquitoes in the kitchen didn’t make things any easier. They pounded away on my flesh, getting high on my blood as I sat there on the kitchen floor. I listened again. The screaming had stopped and so had the vomiting. I could hear him snoring violently. “Oh praise God!”. I heaved a heavy sigh of relief as the snores grew even more violent.

I looked at my watch. 4.30am. The snoring had died down. The mosquitoes in the kitchen, however, had become more voracious. I slowly unlocked the door and peeped into the living room. All clear. I took two forks from the kitchen – just in case he attacked. Don’t ask me why I didn’t take a knife. I wanted to defend myself, not commit murder.

5am. I heard his alarm go off. Few minutes later, I heard him get into the shower then dress up. “Won’t you take your bath?”, he asked me as he stepped into the living room. “No, I’m fine. I’ll do that when I get to the hostel”, I responded. “Okay then”, he replied. “Let me drop you off at the junction. I don’t want to be late for work”.

Thankfully, he gave me some money to take a cab home.

And that, ladies and gentlemen, was how I survived a deadly date!

What’s your worst dating experience? Let me know in the comments section.